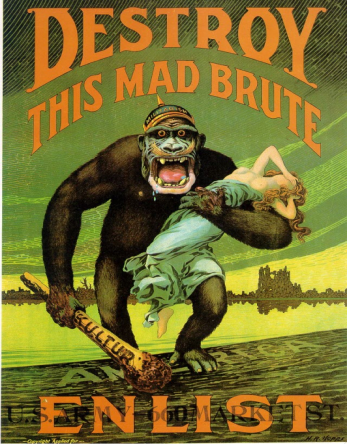 This U.S army recruitment poster was used in 1917 to encourage men of America to join the U.S army.I feel it has a strong meaning to it the poster even contains a word, which is sometimes used derogatorily to suggest elements of racism, authoritarianism, or militarism against German citizens.The word is purposely placed on the bat to emphasise how much they aim to take down the German Army. The fact that they even have the word on the bat to me it seems like the U.S army are trying to demean the Germans.

The poster above I feel is powerful, I feel as if the aim of the poster is to make you feel like you are worthless if you didn’t join the army because your son might look at you as if you are a piece of rubbish. I also think that the poster is saying that you are not a real role model to your son if didn’t join the British army and fight for your country.

This Anti German poster suggests to me that the Americans are trying to say that the Germans are reckless and uncivilized destroyers of the world and are out to cause havoc across the world. Also it suggests that Americans see Germans are violent.